After an intensive community-based planning process, in 2018 San Leandro adopted a plan to transform the Bay Fair neighborhood — the mall and surrounding areas — into a vibrant transit village. 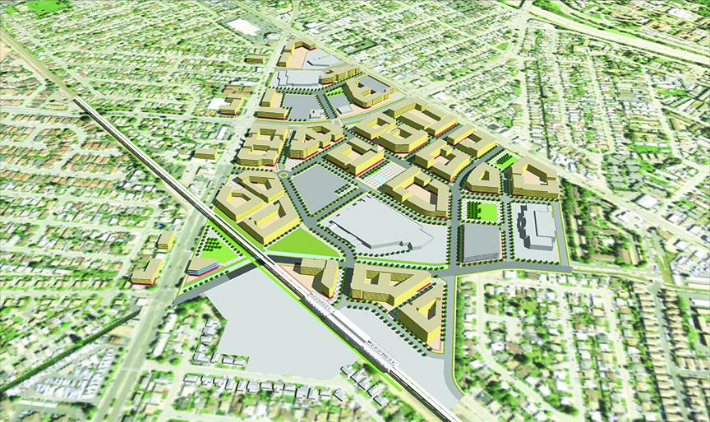 The shopping plaza has been a local destination since its opening in 1957, and, buoyed by its BART-station location, has remained a lively retail center even as retail trends have shifted. It is currently anchored by Target, Macy’s, Old Navy and Bed, Bath and Beyond, and is home to popular amenities like the 16-screen Century Theater, a 24-Hour Fitness and a Saturday farmer’s market.

But malls everywhere are looking to update their land use model to be more relevant, says Tom Liao, San Leandro’s community development director.

“The vision that emerged for the Bay Fair area is a robust, high-density, mixed-use neighborhood,” Liao says. “Grids of smaller blocks create a community and a self-sustaining, human scale.”

The plan calls for open spaces like parklets and pedestrian areas, and community gathering spots for summer concerts and festivals — spaces that create a sense of place to attract residents, workers, businesses and the surrounding community.

It’s a model that is at once a mobility plan, a housing solution with market-rate and affordable offerings, and, with its low-carbon, transit-oriented design, a climate-action strategy. BART and AC transit lines on East 14th Street will connect with first- and last-mile solutions, like bike rentals and bike racks, to get people between home and transit. That includes the Alameda County Transportation Commission’s extension of the East Bay Greenway, a regional bike and pedestrian path that will go right by the BART station.

“That’s a game changer,” Liao says. “It incentivizes people to get out of their cars and creates a nice, clear path to the planned village area.”

The density will concentrate in the central area near BART, with building heights getting lower as development gently integrates with the surrounding residential neighborhoods, according the plan, which estimates up to 2,500 housing units, 300,000 square feet of office and an evolving retail picture as that sector’s space needs continue to adapt to online sales.

“We were careful not to be too prescriptive in our language,” Liao says. “It’s important to let the market dictate exactly the right balance of housing to commercial, office and retail.”

The project’s designation as an Opportunity Zone will help projects get funded. In addition, fewer landowners and larger size parcels compared to traditional development contribute to a smoother land-acquisition path for developers. But what’s really unique about the Bay Fair project, Liao says, is the public-private cooperation.

Some land is owned by BART, some parcels cross into unincorporated Alameda County, and Madison Marquette owns the Bayfair Center mall; the Metropolitan Transportation Commission funded the plan. Unlike most privately-owned projects, he says, “Many entities have a stake in us succeeding—there’s been a broad-based coalition working together from the start.”

With the planning process now complete, over the next several years the city is addressing nitty-gritty issues, like amending zoning codes to implement higher density development. The plan unfolds across 2035, but it’s already off and running, with one large parcel already on the market.

“The pace has already exceeded our projections,” Liao says.