BY: ROB SMITH | FROM THE PRINT EDITION | JULY 2019 (as appearing in Seattle Business)

When Pacific Place shopping center opened in 1998, breathless reviews described it as part of a “retail explosion.” It was credited — along with the opening of the Nordstrom flagship store across the street — with “revitalizing downtown Seattle” and creating a “retail renaissance” in the heart of the shopping district. 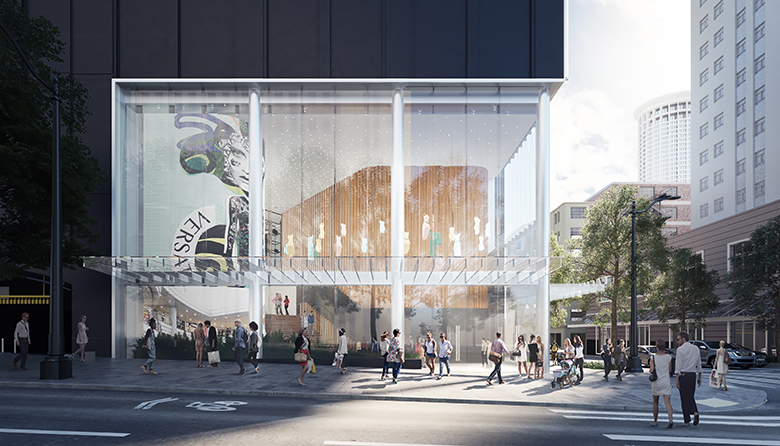 The bloom faded over time. Like at other malls, retailers and restaurants came and went. Vacancy rates also fluctuated as online shopping nibbled away at brick-and-mortar retailers. The 1990s post-modernism aesthetic, with its mix of colors and shapes, made it look worn and tired and drew attention away from tenants.

Now, more than two years after Pacific Place owner Madison Marquette announced plans to redevelop the upscale shopping center, that’s about to change. Next month, Madison will unveil an eye-popping, two-story glass atrium at Seventh Avenue and Olive Street that will open the center up to the bustling South Lake Union neighborhood.

By December, four stories of glass will be installed at the entrance around the block, at Sixth Avenue and Pine Street, flooding the entryway with natural light. An interior walkway will connect the north and south ends of the center, which will “create an interior street that people can wander through,” says Daniel Meyers, senior vice president at Washington, D.C.-based Madison Marquette.

The entire interior will be redone to make it more contemporary, including a “living green wall” that runs from the first through fourth floors. The atrium will be expanded to the lower level where the garage elevators open, which “felt a little bit like a subway,” Meyers says.

Madison Marquette in 2014 purchased the 339,000-square-foot retail center, located at 600 Pine St., for $271 million and subsequently bought the underground parking garage for $87 million. The commercial real estate and investment company is not disclosing the cost of the redevelopment.

The shopping center is anchored by clothier Barneys New York, jeweler Tiffany & Company, restaurant Din Tai Fung and also is home to 50 shops and restaurants, including a movie theater. Popular HaiDiLao hot pot restaurant will open on the third floor this winter.