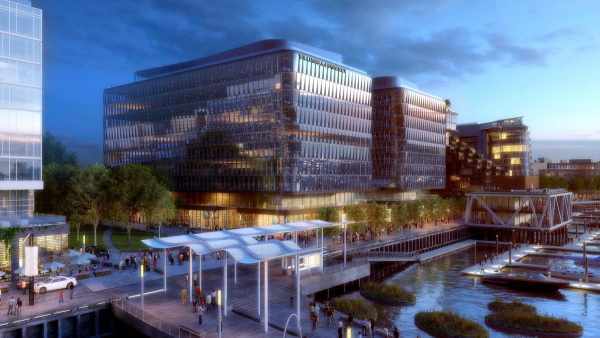 A rendering of The Wharf’s second phase, including the two buildings Williams & Connolly will lease. SHOP ARCHITECTS/WDG ARCHITECTS

Williams & Connolly LLP has signed on as an anchor office tenant in the second phase of The Wharf, a major win for developer Hoffman-Madison Waterfront as it prepares to break ground on the next installment of its Southwest waterfront mixed-use project.

The high-powered law firm, which has represented notables including President Bill Clinton and Oliver North, has pre-leased 292,000 square feet at 690 Maine Ave. SW as part of a relocation from its current space at 725 12th St. NW. Williams & Connolly will occupy all of one building and part of a second, connected via a second-level bridge. It is slated to move into the 500,000-square-foot structure, designed by SHoP Architects and WDG Architects as the architect of record, in July 2022. The law firm’s lease includes penthouse-level space for use as conference and event space with dining facilities.

Monty Hoffman, founder and CEO of PN Hoffman, said he views the law firm’s early commitment as an endorsement of the sense of community that has been established with the project’s first phase. The first two office buildings that delivered with phase 1, 800 Maine Ave. SW and 1000 Maine Ave. SW, have leased up at a faster-than-expected pace, attracting a strong roster of tenantsincluding law firm Fish & Richardson PC. Hoffman said many of those companies, Williams & Connolly among them, view The Wharf’s amenities as an important recruiting tool.

“It’s a very, very exciting start to our phase two, and we do have several other prospective deals in the works as well,” Hoffman said. “I believe the overarching reason that they chose us is, of course they’re the top law firm, and they want to recruit and retain the top talent in the industry, and the trophy office space will help them with that.”

The Wharf’s first phase delivered in October 2017. Its second, mirroring the first, will be developed big-bang style with a mix of new office, residential, retail and hotel space. In addition to the two connected office buildings, there will be a third, boutique office with about 80,000 square feet, 235 apartments, a Pendry hotel, a trophy condo building designed by Rafael Viñoly Architects, and a pair of restaurants to sit on piers, among other things. It is expected to break ground in April, though Hoffman declined to discuss whether the developer has secured a full financing package.

The law firm, with 600 attorneys and professional staff, kicked off its search more than two years ago with the aid of tenant rep firm Savills Studley and architecture firm HYL Architecture. It homed in on The Wharf this past spring, and signed a letter of intent in April, Hoffman said. Those negotiations wrapped up this week with a 15-year lease at the planned LEED Gold development. Savills Studley brokers David Lipson, Scott Hoffman, Tyler Bensten and Steve Tassi represented the firm. JLL brokers Brian Dawson and Amy Bowserrepresented Hoffman Madison Waterfront in the deal.

In a statement, Kenneth Smurzynski, chair of the law firm’s real estate committee who headed the search process, explained why the firm chose The Wharf for its new home after being based near Metro Center since 1992.

“After a lengthy and thorough search process, we concluded that The Wharf design and location were the perfect choice for our unique space requirements and approach to law practice,” he said.

Hoffman-Madison Waterfront has also added another high-profile name to one of its first-phase office buildings, the Business Roundtable, which will lease 30,500 square feet at 1000 Maine Ave. in summer 2019. The Roundtable represents the leadership of some of the nation’s biggest companies. It will push occupancy at 1000 Maine Ave. to about 95 percent when it relocates from its current space at 300 New Jersey Ave. NW. Transwestern brokers John Schlegel and John Lugar represented the Roundtable, and Dawson and Bowser represented Hoffman-Madison Waterfront.

Peter Cole, chief development and asset management officer at Madison Marquette, said landing the Roundtable and Williams & Connolly highlight that The Wharf has emerged as a sought-after business location.

“They both represent important and impactful events to The Wharf and to our development here, but I think they’re different,” he said. “The Business Roundtable, its membership is 100 of the most significant CEOs in the country, and with their national stage and their perspective, to have them pick The Wharf and really making it their headquarters, we’re ecstatic about that.

And Williams & Connolly, to have them be the first transaction as the second phase is a validation of what we always believed but could never really have hoped for, that a preeminent law firm, in the region, perhaps in the world, picked The Wharf for its home.”