The Fall and Rise of the Town Springsteen Made Famous

Bruce just turned 70, and Asbury Park is now one of the country’s coolest shore towns. A sold-out weekend festival celebrated its musical heart.

ASBURY PARK, N.J. — This is a city that music put on the map. Bruce Springsteen called it home, elevating a cramped rock club called the Stone Pony to legendary status and attracting national attention to a thriving local music scene. 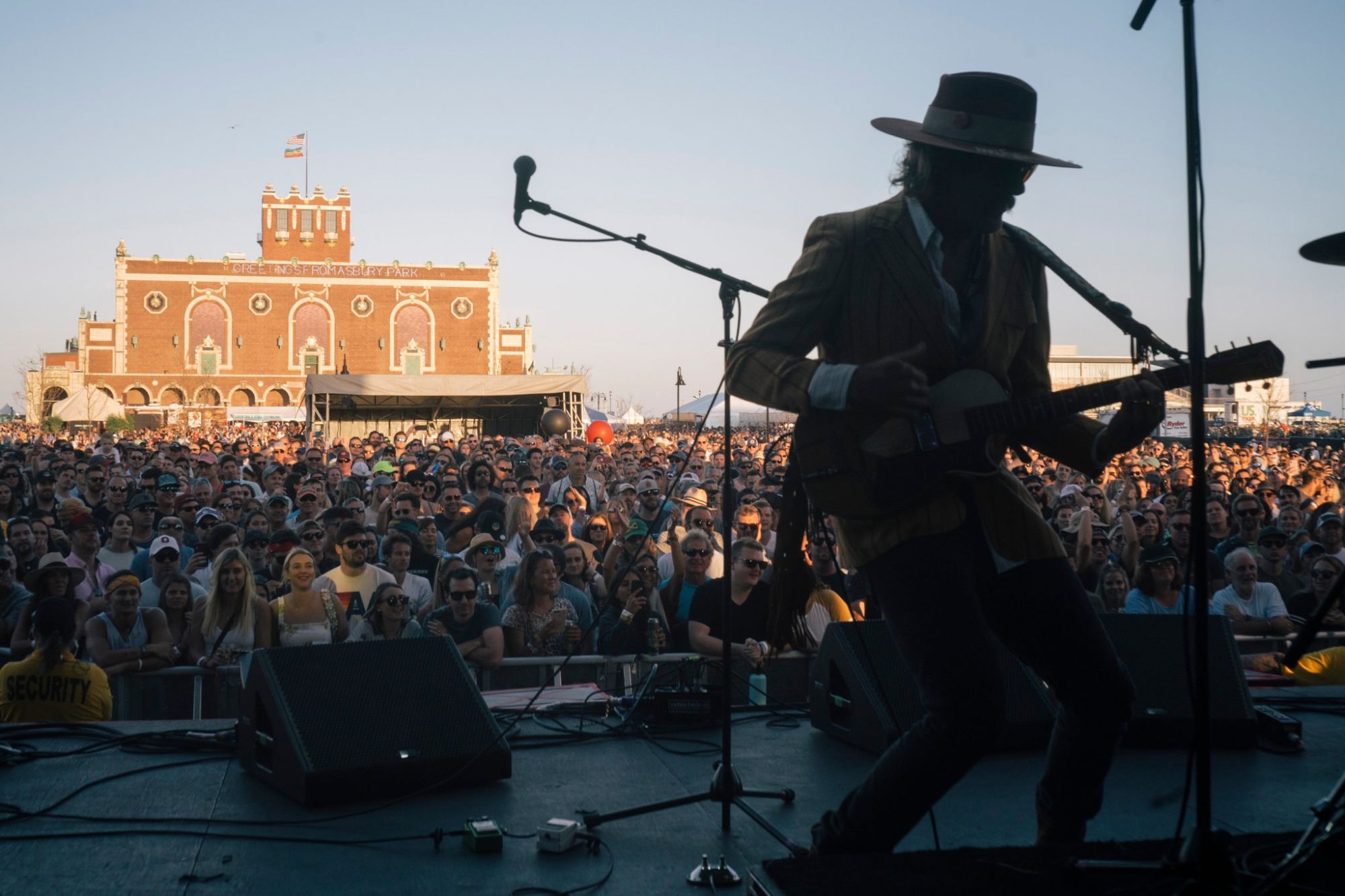 Asbury Park is “a really hip, cool place,” said Donavon Frankenreiter, who performed on Saturday at the SeaHearNow music, surf and art festival.CreditCreditBen Sklar for The New York Times

And when Asbury Park fell on hard times, a steep decline that began in the 1980s and continued for years, music proved the heartbeat that sustained it. Now, multimillion-dollar condos, luxury hotels, trendy restaurants and several craft breweries have burnished Asbury Park’s image as one of the coolest shore towns in the country.

And a two-day festival last weekend offered testament that the foundation on which Asbury Park’s ascent rests is the same as when the Stone Pony opened its doors in 1974: live music.

“Last time we were here, we played in a parking lot behind the Stone Pony,” said Wesley Schultz, the lead singer of the Lumineers, as the band closed the first night of the second annual SeaHearNow music, surf and art festival, which was sold out for months and drew tens of thousands of people.

Just ahead of Mr. Springsteen’s 70th birthday on Monday, music fans crammed to the ocean’s edge as rock, folk, blues pop and punk artists issued a loud, extensive anthem for Asbury Park — a proclamation that this city that was once a promised land for music had reclaimed its status as a destination.

Just 10 years ago, a festival of this magnitude was unfathomable to even the wildest of dreamers. Even the Stone Pony briefly closed its doors in the late 1990s.

Fueled by riots in 1970s over inequities in employment opportunities for poorer residents, Asbury Park fell on hard times as jobs vanished, people moved out and crime rose. These days, developers have descended on the city, taking advantage of its seaside location, a revived boardwalk and its mystique.

“Asbury Park is in a place right now where people are loving Asbury Park,” said Danny Clinch, a well-known photographer and musician who grew up in the area with his friend Tim Donnelly, a founder of the festival.

In the 2000s, the two held makeshift art and music exhibits on the boardwalk and long dreamed of expanding to a major festival, but no promoter would take a bet on Asbury.

“We used to have to really, really sell people on even coming to visit Asbury,” Mr. Donnelly said.

“We finally got the timing right,” Mr. Clinch said.

Asbury Park’s renaissance is still a work in progress. Parts of the city away from the sleek waterfront struggle with poverty. Crime remains a problem and the summer saw multiple shootings, including one on the boardwalk during the Fourth of July weekend.

But whatever the challenges, the city continues to boom. In July, the Asbury Ocean Club, a luxury hotel, opened in a new high-rise along the water. With rooms upward of $400 a night, the hotel is more reminiscent of the high-living Hamptons than the kitschy and gritty Jersey Shore.

“When I first came 15 years ago, we always played the Pony, and I was like, ‘This place is killer, what’s going on here?’” said Donavon Frankenreiter, a musician and former professional surfer who played and surfed at the festival. “And they would tell me. And then every year I would come back there would be a new restaurant, new hotel, and in the last 15 years it’s become a really hip, cool place to be.”

Asbury Park has played host to large music festivals in the past. In the late 1990s and early 2000s, the Vans Warped Tour set up in the parking lots behind the Stone Pony, as bands like Blink-182, Less Than Jake and Bad Religion ripped through punk anthems.

“But this place was Armageddon,” said Brian Baker, a guitarist for Bad Religion, recalling looking out from the Warped Tour stage. “It was a complete dead zone. It was shocking. There were, like, broken foundations of buildings.”

Almost every musician who performed here years ago has a story about their early experiences in Asbury Park. Jake Clemons, the saxophonist for Mr. Springsteen’s E Street Band, recalled roaming the city before a gig in the late 1990s when a bandmate fell on a rock jetty and got an infection.

But the recent festival offered a stark counterpoint. As he whizzed on a golf cart among the three stages to sit in with various artists, Mr. Clemons — whose uncle was Clarence Clemons, Mr. Springsteen’s sidekick and renowned saxophonist — said Asbury Park held a special meaning for him.

“It would be naïve for anybody to say that Asbury Park hasn’t had an influence for anyone who plays rock ’n’ roll,” he said.

If the festival marked a high point for Asbury Park, the after-midnight scene at the Stone Pony harkened back to its heyday in the 1970s as musicians shared the small, hallowed stage for an extended jam of Tom Petty, Prince and Springsteen covers that lasted into Sunday’s wee hours.

“This is a bar band place,” said Paul Janeway, the lead singer of St. Paul and the Broken Bones, a band from Birmingham, Ala., that anchored the session. “That’s what the E Street band was: the best bar band in America. And that’s still the spirit here.”

The jam ended with about 20 musicians squeezed onto the stage, playing a triumphant and bluesy version of Mr. Springsteen’s “Hungry Heart.”

Mr. Janeway said he “never really made it out of Alabama” as a boy, but knew the clout Asbury Park held in the music world.

“For me, to be able to feel like you’re showing off your town, it’s a big deal,” he said. “If you’re from Asbury Park, or a place like Birmingham, you have a sense of, there’s a pride and a grit to it and I think that that’s important to kind of feel like you can show that off.”