A development team has been selected for one of the largest projects planned in the District.  The Armed Forces Retirement Home announced Friday it selected Madison Marquette and Urban Atlantic for the mixed-use redevelopment of an 80-acre piece of its campus on North Capitol Street. 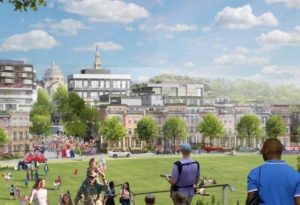 The independent federal agency plans to negotiate a long-term ground lease with the development team, which was recommended by a five-member expert panel convened by the General Services Administration following a competition that attracted many of the region’s top developers.

Madison Marquette and Urban Atlantic’s proposal calls for 4.3M SF of development, including a mix of residential, retail, recreational, arts and wellness uses. It is planned to feature a combination of new development and adaptive reuse of historic buildings. It will also have 20 acres of public green space and pedestrian and bike paths.

The developers have experience with the type of large-scale development envisioned for the site. Madison Marquette is a partner on The Wharf, while Urban Atlantic is working on the Parks at Walter Reed and New Carrollton mixed-use projects.

AFRH, a retirement community for enlisted military personnel, said its funding sources have declined recently and Congress has not infused the necessary money to continue operations. The development partnership should allow it to maintain funding for its operations in the future, AFRH Chief Operating Officer James M. Branham said.

“The selection of the Madison | Urban team marks a significant step towards raising funds necessary to sustain the home’s trust fund and improve the physical infrastructure on our Washington, D.C., campus,” Branham said in a release. “The revenues that AFRH will realize through this project will help us build and renovate the facilities needed to care for America’s heroes today and in the future.”