As some malls struggle to attract shoppers, owners look to ‘food halls’ as potential solution

Food courts have been a fixture of shopping malls from the early days of that retail real estate concept over a half-century ago. But the evolution of consumer behavior in the e-commerce world and the changing economics of the restaurant business are making property owners and food entrepreneurs take a closer look at a relatively new concept. 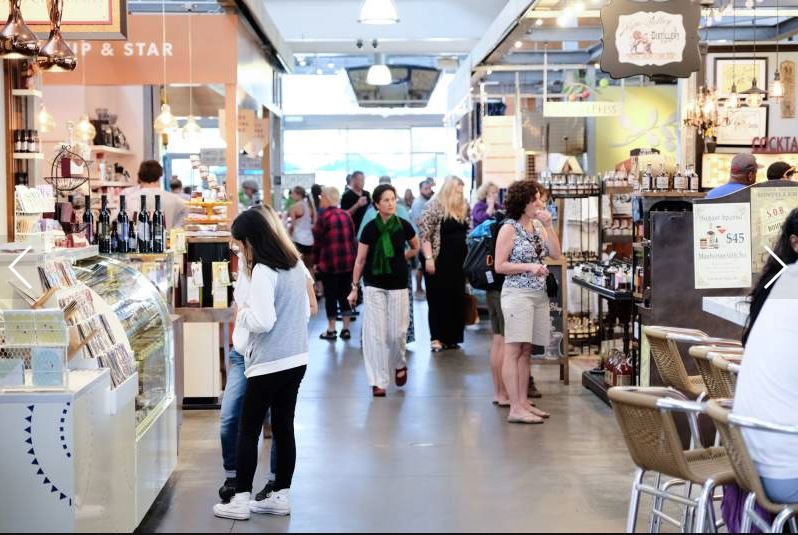 Oxbow Public Market in downtown Napa and the Ferry Building Marketplace on the San Francisco waterfront are both featured as examples of small-market and large-scale “food halls” in the latest analysis of the commercial real estate phenomenon by Cushman & Wakefield.

“A food hall’s success is still dependent on a celebration of regional or cultural authenticity and farm-to-fork approaches rather than mass-market concepts,” said the report. “Successful projects will emphasize constituency, quality and sourcing rather than big-box predictability. They also will continue to adhere to the importance of design, both to entice consumers and to maximize efficiencies.”

The focus of these sites is a focus on independent and artisinal vendors, rather than national or regional chains. The number of locations has grown from around 120 nationwide when Cushman & Wakefield first studied the trend in 2016 to a projected 450 to be operational by the end of next year. The trend has moved from urban centers to suburban area outside of tourist destinations and is even finding its way into traditional malls and corporate cafeterias, the report said.

Major owners of U.S. retail properties are taking notice of the trend, with Westfield, Simon and Macerich among the players with active projects, but Canadian property owners such as Oxford are moving faster, with food halls about half its malls, according to Garrick Brown, head of retail research in the Americas for Cushman & Wakefield.

“In some cases, they are replacements of food courts,” Brown said, noting that one-third of 120 currently active food hall projects are in malls. “In some cases, they are in suburban markets, where there is concern that children’s tastes still want corn dogs, so they have created a food hall concept in a different area of the mall or adjacent to the food court. There they have elevated, artisanal concepts and chef demonstrations throughout the day.”

The average U.S. regional shopping mall in 2006 had roughly 10% of its space occupied by a category of tenants called food, beverage and entertainment, according to the Cushman & Wakefield study. But as of last year, that proportion had climbed to roughly one-quarter of space in top malls, the report said.

“What we do know is food is a key driver in every project today,” said Thomas Gilmore, chief strategy officer for retail solutions for Madison Marquette. The Washington, D.C.-based company’s portfolio includes a property management joint venture with The Carlin Company, a Napa-based company that also created the Ferry Building Marketplace as well as Napa Farms Market at San Francisco International Airport.

Yet Steve Carlin, who was behind a revival of the historical Oakville Grocery into a locavore retail concept with local properties now owned by Boisset Collection, doesn’t consider Oxbow Public Market to be a food hall because of the relative lack of on-premises communal dining areas.

“Food halls are in some ways an evolution of the food court,” Carlin said. “Years ago, the food court was an amenity for shoppers already there for other reasons and needed a place to eat. “Today the makeup of food halls is that multiple foodservice operators under one roof are the draw. It’s not just an amenity for shoppers but the reason they come to the shopping center.”

Carlin had made news in the past year with his work with Viviani Trust on a possible food hall at the shuttered Sonoma Cheese Factory property in the city of Sonoma. That concept was withdrawn, but the family hasn’t specified what will come next there.

The Carlin Company plans to host an in-depth seminar in Napa on Nov. 11 and 12 about how to set up and manage food halls, public markets and multiconcept food bazaars.