These megaprojects are reshaping skylines and communities across the US

No, we’re not talking about NY and LA. Developers are building big everywhere

[As appearing in The Real Deal]

While there remains no single reason, massive projects are transforming skylines and communities in dozens of cities.

The Real Deal takes a look six of the biggest projects rising around the country, in places not named New York, Los Angeles, Chicago or Miami. 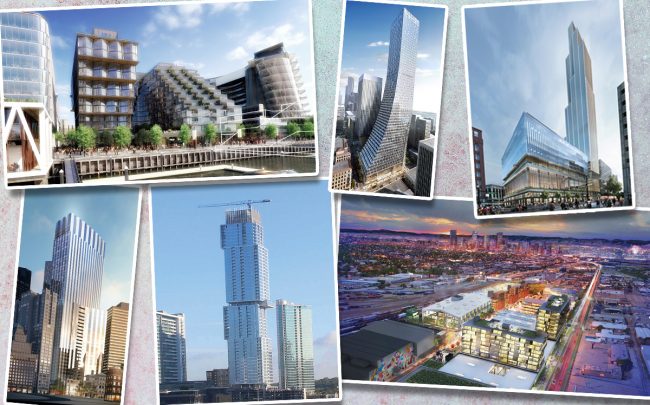 Clockwise from top left: The Wharf Phase 2 in Washington D.C., Rainer Square in Seattle, Hudson’s Site in Detroit, North Wynkoop in Denver, the Independent in Austin, and Winthrop Center in Boston.

In Austin, Texas, which has been home to one of the hottest housing markets, Constructive Ventures, Aspen Heights Partners and CIM Group have teamed up on a 58-story, 370-unit condo tower. The trio is hoping the $300 million Jenga-like high-rise can seize on demand in a city where home sale prices hit all-time highs last year. And where Apple recently announced plans for a $1 billion corporate campus.

And while Seattle’s tech growth spurt has leveled off, it appears Amazon hasn’t gotten the memo. The area has added 55,000 new jobs in the last year alone, according to CNBC, thanks in part to hiring at the Everything Store.

Amazon will have a major role in one of the biggest development projects rising in the city, whose housing market had an impressive run of its own. The company has agreed to occupy all 722,000 square feet of office space in the under constrtuction Rainier Square, a new mixed-use tower being built by Wright Runstad & Company. 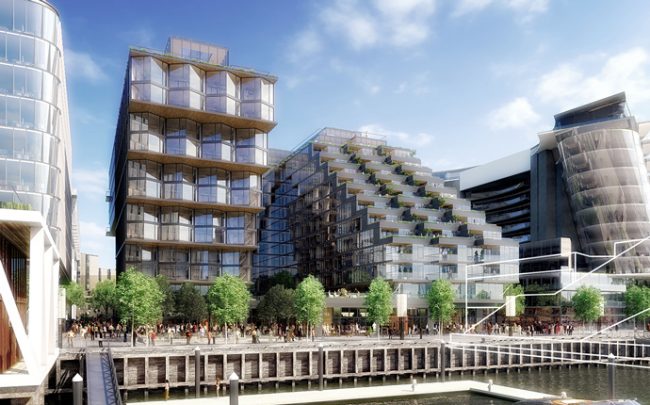 A rendering of the second phase of the Wharf redevelopment in Washington, D.C.

The second phase of Madison Marquette and PN Hoffman’s redevelopment at the southwest wharf will add 1.15 million square feet of mixed-use space to the mile-long waterfront along Washington Channel.

It will add three office buildings, two residential buildings and a hotel, along with retail and restaurant space. Law firm Williams & Connolly has already signed a lease to shift from its downtown headquarters to occupy 300,000 square feet in two of the two office buildings.

The project’s developers are seeking up to $760 million in financing for Phase 2 and will look to break ground this spring, according to Bisnow. Phase 2 is estimated to cost $1.2 billion.

The latest Wharf redevelopment project is expected to be completed by 2022, as the area readies for Amazon’s new HQ 2 location in nearby Crystal City, Virginia.