June 6, 2019 By Laura Fisher Kaiser (as appearing in Interior Design)

“Everybody squeeze in,” he commands. Inside is a counter with a white lacquered backsplash, which slides open seconds later to reveal a conference room. “In lengthy meetings, people wonder, Are we ever going to eat?” Cole explains. “Then they turn around and they’re like, Where did that buffet come from?” 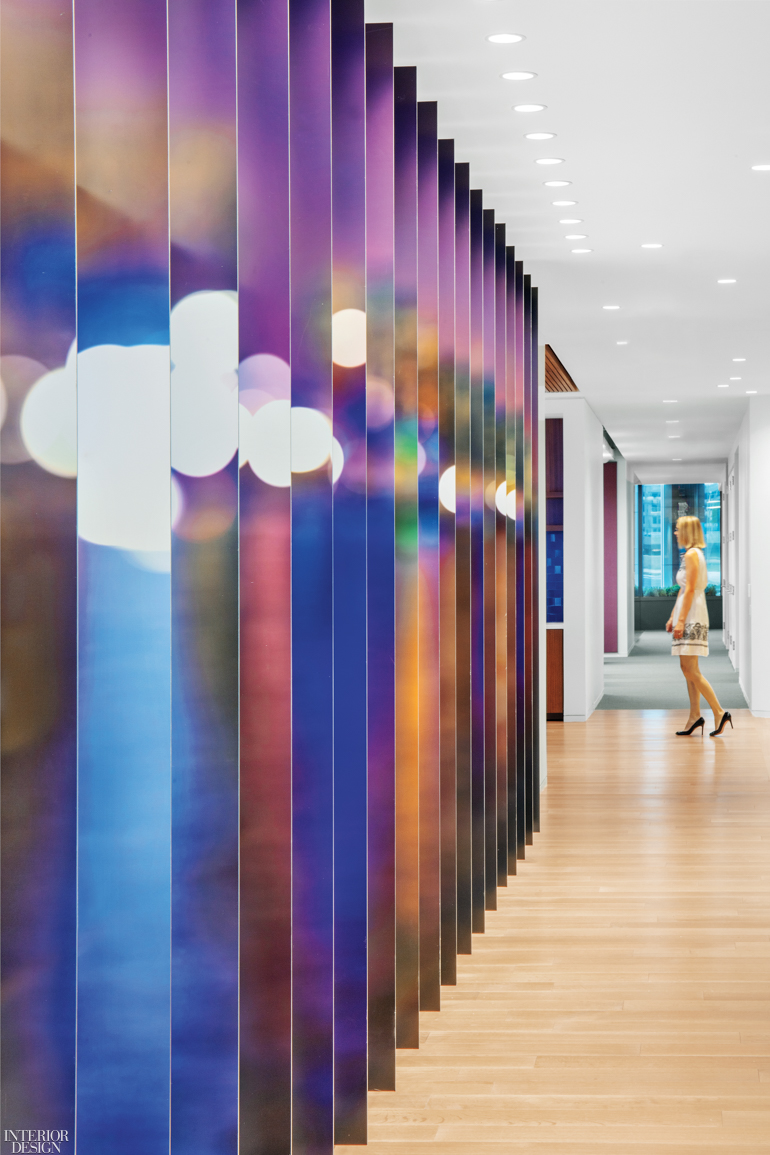 In a corridor of the Madison Marquette headquarters, a storytelling wall slices up a photomural of the Wharf, one of the real-estate developer’s projects. Photography by Eric Laignel.

Two of the visitors, Perkins + Will design principal Ken Wilson and senior associate Haley Nelson, have seen the trick many times. They designed it, after all, to convey hospitality as a theme for a developer whose many mixed-use projects, including the 3.2-million-square-foot Wharf itself, purposefully blur the traditional lines between living, work, and leisure. 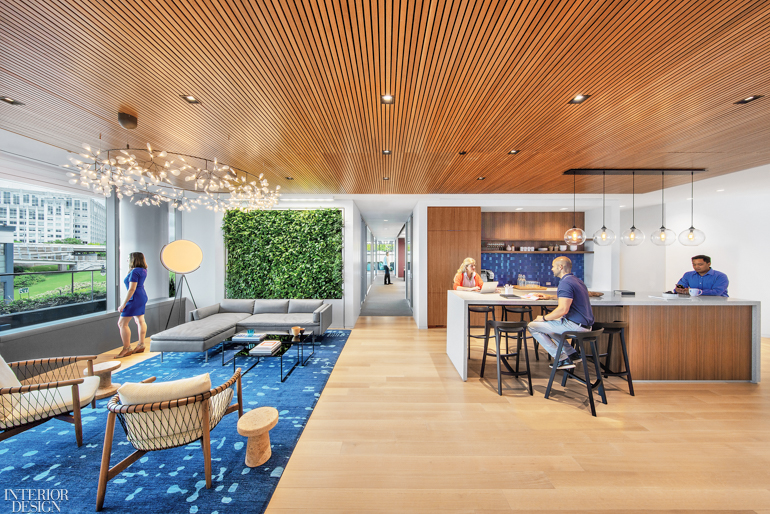 Bertjan Pot and Marcel Wander’s pendant fixture hangs above a BassamFellows sofa in the lounge. Photography by Eric Laignel.

Most of the 17,800-square-foot workplace operates on the show-don’t-tell principle, borrowing odd angles for phone rooms, embedding device chargers in terrazzo counters, and combining textures and finishes befitting a luxury hotel.

The company’s name appears hardly anywhere. The primary branding element is down a hallway leading to a conference area. On one side, a wall of glazing admits daylight and views of the Potomac River. 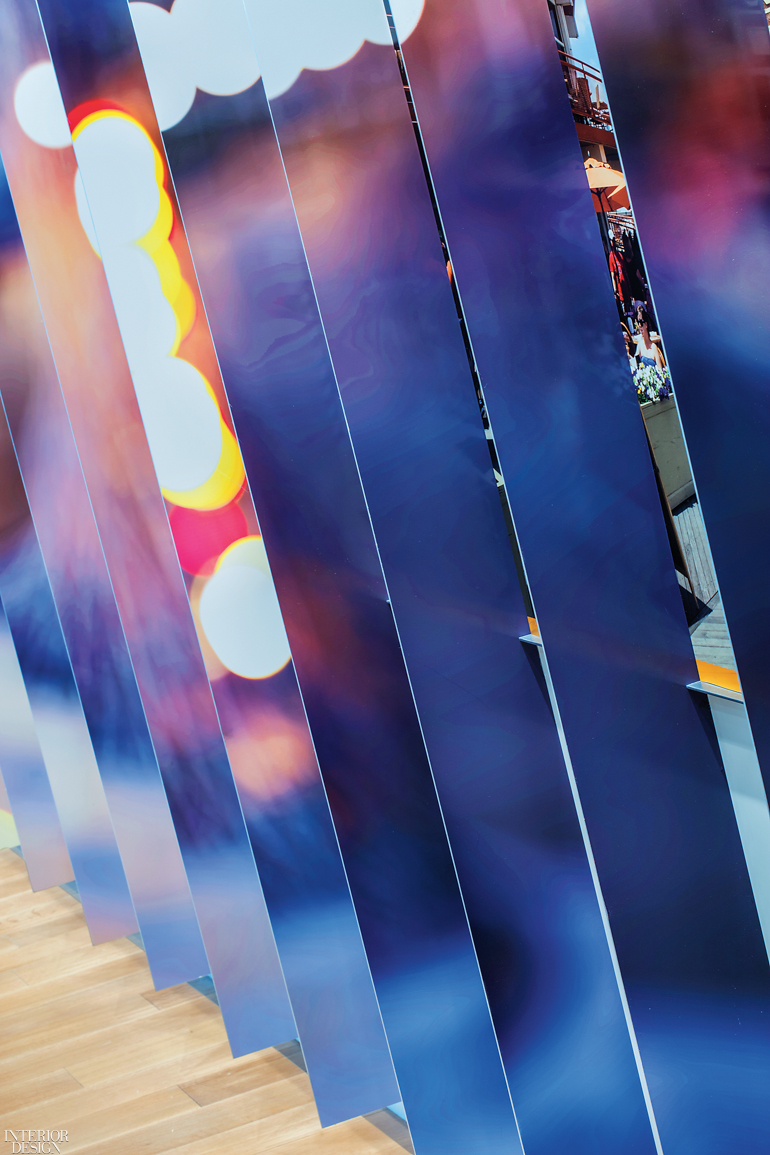 The storytelling wall’s fins are aluminum. Photography by Eric Laignel.

The eye is drawn, however, to the interior wall, where a series of 6-inch-wide, floor-to-ceiling aluminum fins—each imprinted with a slice of a photomural of the Wharf, rendered in bokeh effect—forms a lenticular installation: Approached from the right, the abstract image appears to be a daytime scene; from the left, it’s evening. Between the fins, a millwork display presents a photo series telling the company’s story through iconic projects from New Jersey to California. 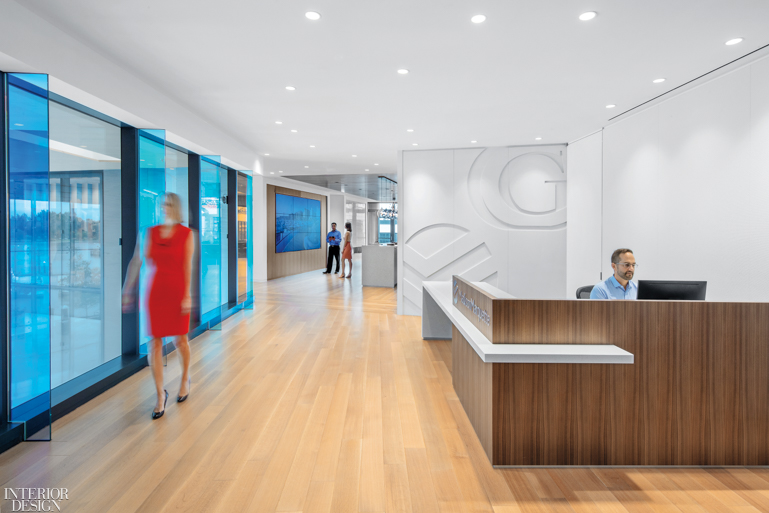 Reception’s desk is backed by a lacquered logo wall, both custom. Photography by Eric Laignel.

“The images are held in place magnetically and can be switched out to reflect specific services,” Wilson says. Those include development, leasing, and management for 330 assets in 24 states and a $6.2 billion investment portfolio. Which means, Wilson says, that the most important design consideration was to create a space “that still looks good with boxes of pizza everywhere.” 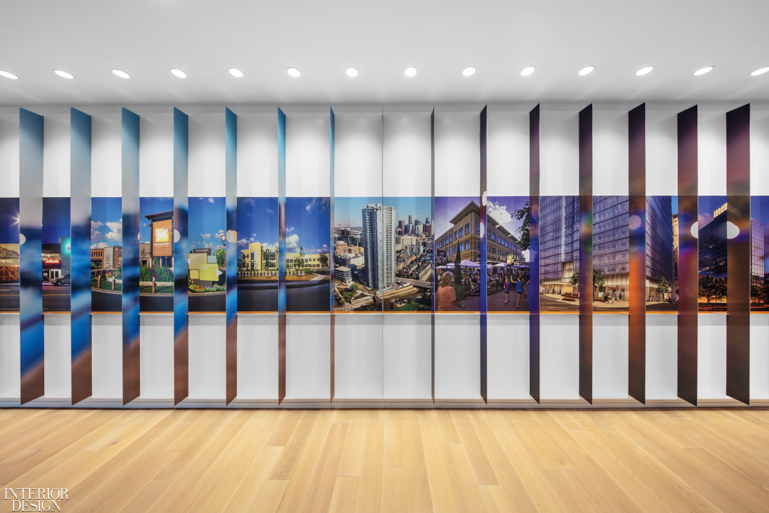 Images of signature Madison Marquette projects are displayed between the fins. Photography by Eric Laignel. 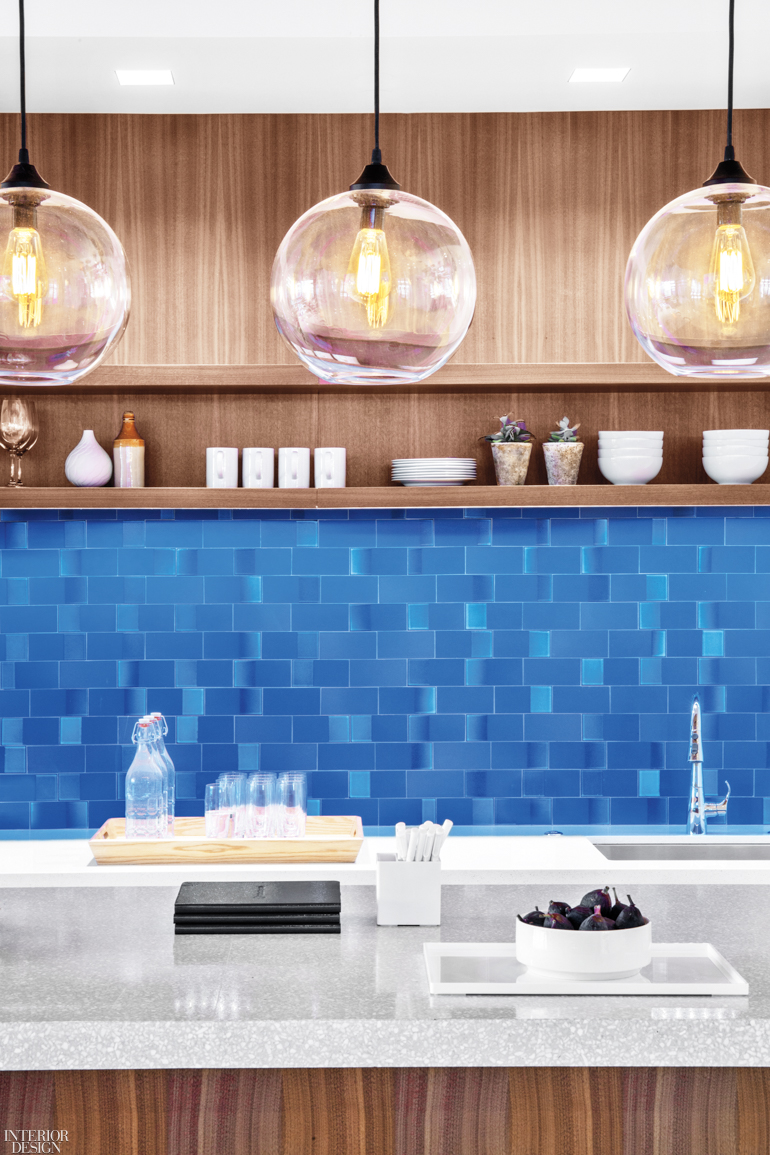 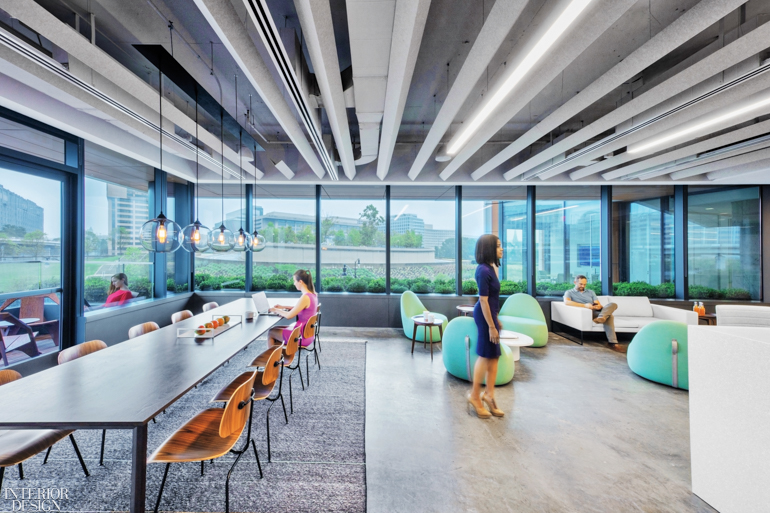 Claudia and Harry Washington lounge chairs stand near the communal walnut table in the café. Photography by Eric Laignel. 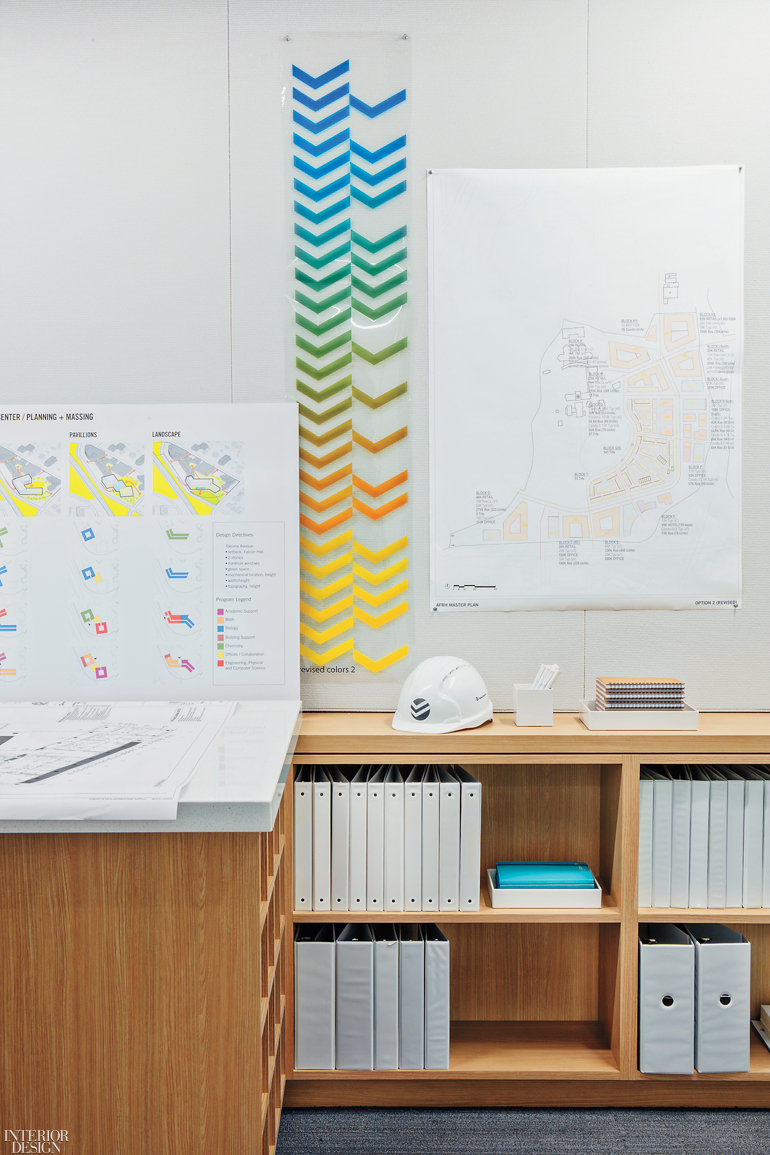 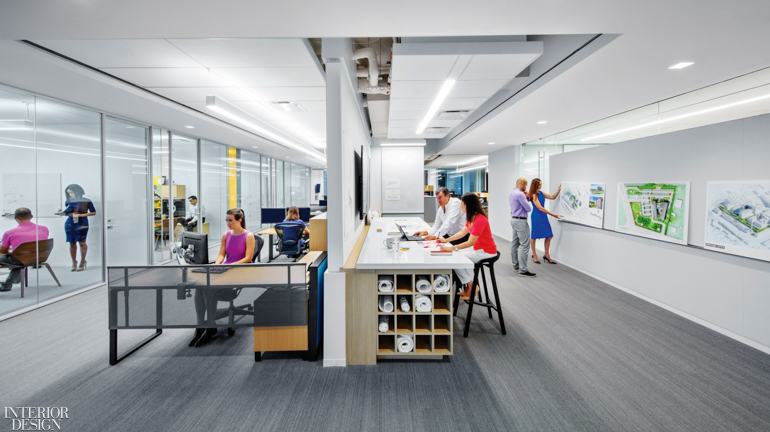 Shared areas are separated from workstations and offices by a partition. Photography by Eric Laignel.