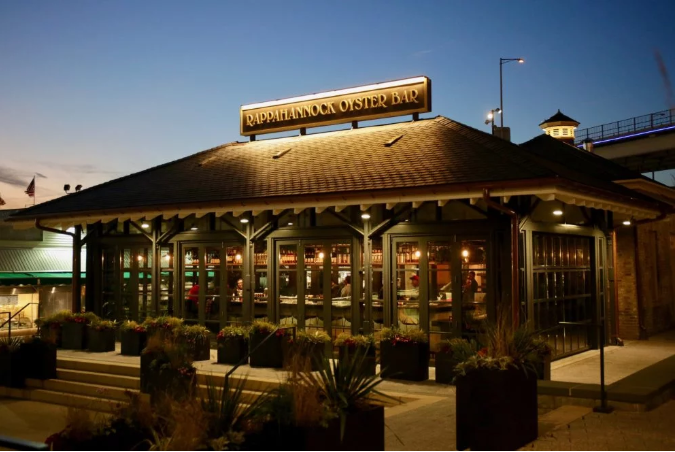 In the early 1900s, Chesapeake watermen dredged the Bay’s bottom for wild oysters and brought their hauls to DC’s “Fish Wharf” on the Southwest Waterfront. Now over a century later, a modern breed of oystermen are setting up shop in the same (albeit very different) place. Cousins Travis and Ryan Croxton of Rappahannock Oyster Co.have rebuilt the Wharf’s historic Oyster Shucking Shed and opened a branch of their popular bivalve bar across from the Maine Avenue Fish Market.

“It’s cool to tie it all together,” says Travis. “During the excavation there were tons of oyster shells stratified the whole way down.”

Rappahannock has become one of the most recognizable names in the Bay’s new-wave oyster industry. The cousins took over their grandfather’s Virginia-based company in 2001—a tenuous time, as the Bay’s oyster harvest had reached record lows—and helped revive the family trade (and, with many others, the health of the water) through sustainable aquaculture. A line of restaurants—including a branch at Union Market, plus newer outposts in Charleston and Los Angeles—gave them more space at the table.

Each Rappahannock location has a different look and menu, beyond core raw bar offerings of Rapp-raised oysters and clams, plus seafood towers and caviar. At the Wharf, longtime general manager Jean Paul Sabatier designed the indoor/outdoor space with help from Union Market neighbor/lifestyle guru Amanda McClements of Salt & Sundry and Little Leaf—all within historical building parameters on the 1912 building, which didn’t allow for much expansion. The airy interior bar only boasts 27 seats, surrounded by accordion-style folding windows that will open onto a 90-seat dining patio in nice weather. Umbrellas outfitted with heaters will keep things toasty on the odd warm-ish winter day in the meantime.

Chef Autumn Cline, who also helms the kitchen at Union Market, is behind the modern oyster bar menu. An alum of Rose’s Luxury, Cline is used to riffing off tradition from her years at the food hall.

“The company kind of treats it like a test kitchen, because people walk into Union Market just wanting to try different things,” says Cline.

Beyond a few staples like the stellar crab cake, oyster stew, and “lambs and clams,” the lineup is new. Cline often borrows from Southern/Mid-Atlantic raw bar traditions as well as Asian flavors that meld well with the seafood. Think crab dip with charred corn and pickled jalapeños; whole garlic-chili glazed fried fish (brined like chicken to keep the flesh moist) with fresh herbs; or a surf n’ turf of lobster and coppa steak (“like the filet mignon of pork” says Cline).

All can be matched with seafood-friendly wines, draft beers, ciders, and barwoman Melissa Smith’s cocktails, which run warm and boozy for winter (a deconstructed mulled wine punch with Cognac, spiced wine syrup, and sparkling wine).

“My philosophy is that burgers were made perfect a long time ago, so you don’t want to mess with the formula too much,” says Cline.

Hit the oyster bar for happy hour deals on raw bar plates and drinks, Monday through Friday from 3 to 6 PM. An all-day menu is available from 11 AM to midnight, Sunday through Thursday and from 11 AM to 1 AM Friday and Saturday.