USGlass Tours Two Projects at The Wharf in Washington, D.C. 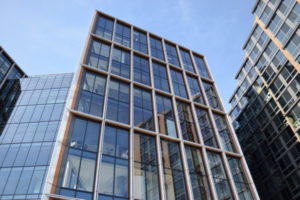 The Wharf in Washington, D.C., offer a new place for locals and tourists alike to enjoy shopping and dining with views of the water. The two buildings sandwiching phase one of the development feature interesting and complex facades. The American Institute of Architects (AIA) Washington D.C. hosted a tour of the projects with emphasis on their facades.

Designed by Kohn Pedersen Fox Associates, 1000 Maine’s more than 108,000-square-foot curtainwall features two different types of terracotta (white and earth colored) and six different façade types. According to Frank D’Andrea, project architect with FOX Architects, the architect of record, the original façade was all glass with glass fins, similar to Gensler’s 2112 Penn project, also in Washington, D.C. The design team eventually decided to frame the windows with terracotta to give the building an earthiness and nautical flare.

The glass fins were originally designed to extend 2 feet, however 2 feet of terracotta is heavy and expensive.

“We ended up reducing the fins to 18 inches and tilting them in,” said D’Andrea. 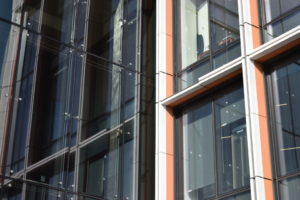 The corner fins extend out further than the typical fins. NBK provided the terracotta. Guardian Glass manufactured the glass and Tvitec manufactured the insulating glass units, which feature 3/8-inch ExtraClear glass with SunGuard SN 70/41 on the #2 surface, a ½-inch argon air space and a ¼-inch of ExtraClear tempered glass. Antamex manufactured and installed the curtainwall.

“Thermal performance was a big deal,” said D’Andrea. “We were able to achieve a U-value of 0.35.”

The original plan was to have the curtainwall glazed in place at Antamex’s facility, but the original terracotta provider backed out, causing that portion to be glazed later.

Another major challenge for the team was ensuring there wasn’t a gap in the air-water line. A primary barrier is located beneath the terracotta. 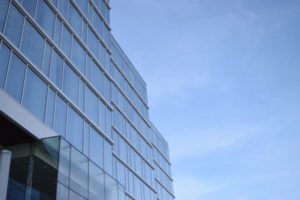 Architecture firm SmithGroup faced a unique challenge with 975 7th St SW. The original owner sold the property and the new owner decided to use the building for two different hotels with different brand identities.

According to Christopher Mayor, project architect with SmithGroup, the project features four different façade types, including an urban, gridded façade on Maine Avenue and a saw-toothed façade on 7th Street. The curtainwalls sit atop a second-floor podium, which nearly surrounds a courtyard for the public and both hotels. Retail stores and restaurants encompass the first-floor space.

The project involved a design-assist between SmithGroup and curtainwall manufacturer Accura Systems. Viracon provided the glazing and Service Glass installed it. The insulating glass units include a 3/8-inch clear outer lite with Viracon VRE1-65 low-E on the #2 surface, a ¾-inch argon air space and a ¼-inch clear inner lite.

“Viracon’s glass has a beautiful way of matching what’s happening in the sky,” said Mayor. 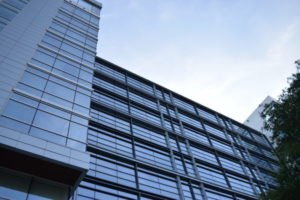 The glazing system was originally designed to be a window wall system but curtainwall was able to be delivered more quickly, which was important because this parcel was the final to begin construction.

Curtain Wall Design & Consulting was the envelope consultant for both projects.