The Jersey trio also played “Only Human,” starting their set at the famed Stone Pony and ending with fireworks off the boardwalk

By BRITTANY SPANOS  (as appearing in Rolling Stone) 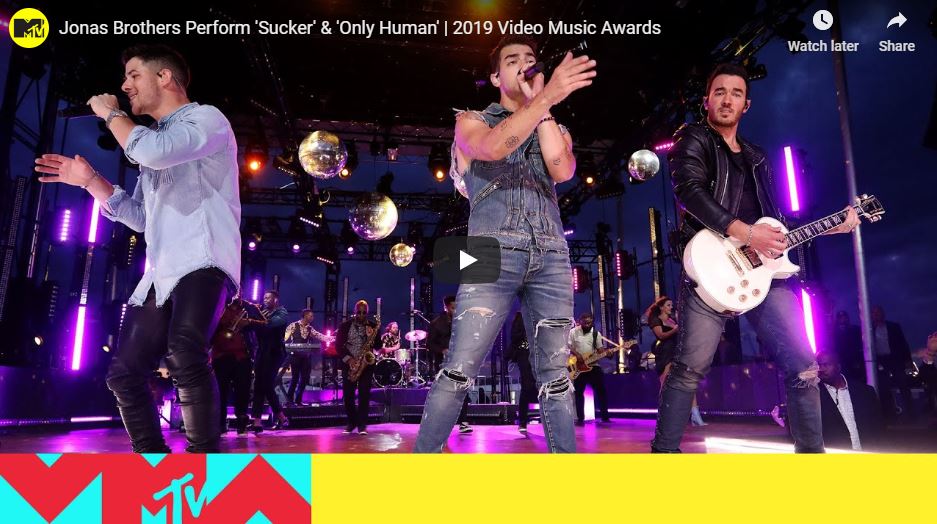 The New Jersey-raised Jonas Brothers celebrated their home state for their VMA performance by performing their Happiness Begins singles “Sucker” and “Only Human” on the famed Asbury Park boardwalk. The band is currently on their first tour together in six years.

The band took on “Sucker” to a packed audience at the famed Stone Pony with their full band. During the second verse, they performed while walking out of the venue to more fans screaming outside. They made their way towards a stage on Asbury Park’s boardwalk as they began their latest single “Only Human.” The boys danced in front of a stacked horn section as a firework show began behind them.

The Jonas Brothers had disbanded in 2013 following turmoil within the group. Nick and Joe Jonaspursued solo projects while the eldest Kevin started a construction company as well as a communications venture meant to aid social media influencers. In February, the band of brothers announced their reunion and released “Sucker,” their first Number One single ever, in March. Happiness Begins, the group’s first album in a decade, came out in June and debuted at Number One. The Jonas Brothers launched their tour earlier this month.

At the Video Music Awards, the group is nominated for six awards, including Best Group and Video of the Year for “Sucker.”