There’s more than enough to explore on the Eastside, but you might consider crossing Lake Washington

Pacific Place has announced the opening of its new South Lake Union-facing grand entrance at Seventh Avenue and Olive Way. The Gensler-designed grand entrance will connect to the atrium and the existing Pine Street entry, which will become a two-story, street-level entrance with a new glass façade. 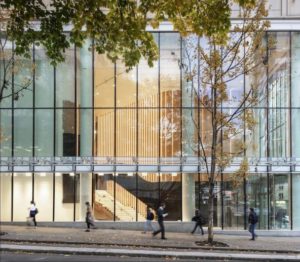 “The vision throughout the development has been to open up the center to the street,” stated Daniel Meyers, senior vice president, project management at Madison Marquette, who is spearheading the project for the developer. “The opening of the new entrance, which will ultimately allow for a full intersection of the city block and welcome Seattle to linger, dine, and shop, is a major milestone in actualizing this mission.”

The Northwest contemporary design weaves the quintessential natural elements of the Pacific Northwest in an abstract manner. Elements such as the Cascade Mountains were an inspiration for the design of the glass corner entrances. Modern lighting and interior design, including a grand curved wood wall, take influence from the rain, forest, and the Puget Sound. The new entrance also welcomes guests with a 24-foot-tall LED screen depicting images of the Northwest and representations from local artists.

As the redevelopment tracks toward a completion in early 2020, the leasing team has been busy filling the new spaces with a dynamic mix of tenants. Lululemon Athletica will open a new retail store in January, located on level one, leading to the new entrance at Seventh Avenue and Olive Way. The shopping center will also continue its pop-up store program, including Bezel & Kiln, Simply Seattle, and Wishes Toys & Games. And Seattle’s 8,408-square-foot HaiDiLao location will open early spring 2020 on the third floor of Pacific Place, adjacent to the skybridge to the Nordstrom flagship store. New tenants are anticipated to be announced once leases are signed.