WHEN WORLDS COLLIDE: 4 TYPES OF CRE MERGERS AND WHY SO MANY ARE HAPPENING

The priciest and most impactful deals in commercial real estate occur when two large companies join forces through a merger or an acquisition.  The combining of personnel, balance sheets and property portfolios requires dozens of professionals on both sides of a transaction working countless hours. The largest mergers change the makeup of the companies that drive the market and ultimately alter the landscape of the industry.

Several of these megadeals have occurred in the Washington, D.C., commercial real estate market over the last two years, and have taken a variety of forms.

The M&A activity has also included private firms like Brookfield acquiring public REITs like Forest City and GGP and taking them private, or, in one case, a large, private company, The JBG Cos., merging with a Vornado spinoff in order to go public.

The market forces that lead companies to merge vary widely in each of these situations. Examining the circumstances that have led to these recent mergers can shed light on the likelihood of further consolidation among large commercial property owners in the coming years.

Private companies that own real estate long term strive to attract capital during economic boom times and remain stable through downturns. Scaling up can achieve both of those goals, and the quickest way to scale is by merging with, and acquiring, other companies.

This was part of the equation that led D.C.-based Madison Marquette last year to merge with Houston-based PMRG. The deal created a nationwide firm with an investment platform worth over $6B, including The Wharf in D.C., and several additional business lines such as property management, development and leasing services. Madison Marquette President John Fleury said the company sought to expand its investment portfolio and its service offerings to help create stability.

“The vertically integrated thesis is intended to insulate our business from the cyclical nature of the commercial real estate industry,” Fleury said. “When one component is on fire, maybe the other one is not doing so great. But when the other one starts to cool, you get coverage because of the shift in the market.” 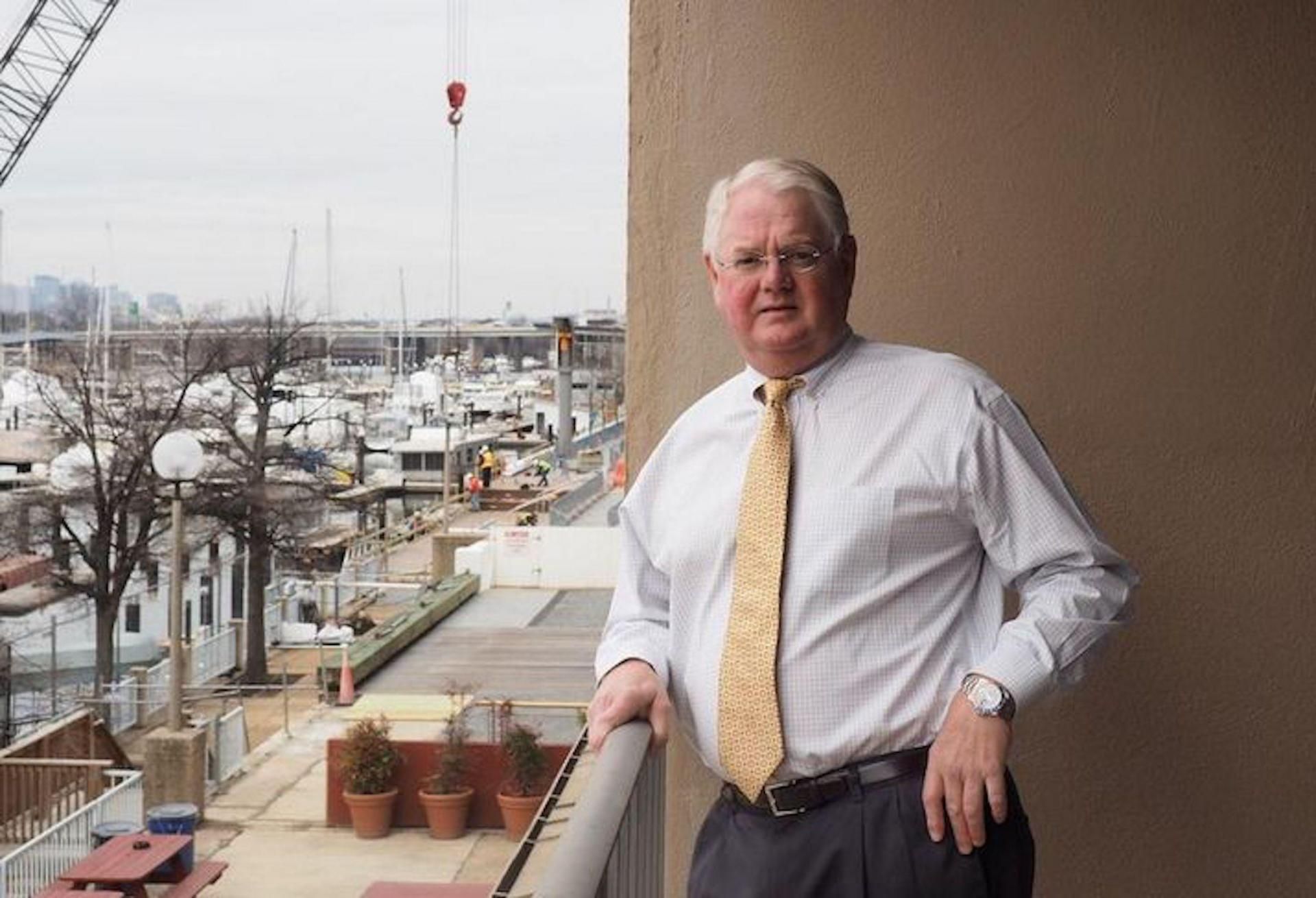 Fleury described the merger as opportunistic and said the companies’ portfolios complemented each other well within minimal overlap. Madison Marquette had not executed a merger like the PMRG deal since its 1992 founding, and the timing is partially related to the current economic cycle, by some measures the longest on record.

Fleury said the deal did not take place primarily because of the need to diversify the business to prepare for a looming economic downturn, but that did make it more appealing.

“The fact that we are late in the cycle probably just made the conviction to pursue a transaction like this, when one hadn’t been done in this order of magnitude, a little easier,” he said.

“It’s easier for investors to deploy more capital in a larger platform,” Carbins said. “So if you have expertise and you have a larger platform, you can attract bigger chunks of capital and achieve more diversity in your assets and a higher volume of transactions.”

Mergers can also help companies compete for deals during hot markets by giving them larger teams that can quickly prepare bids and execute transactions, she said.

“There’s a lot of competition for deals out there,” Carbins said. “[Mergers provide] access to more capital faster and the ability to bring a big team, because the underwriting has to be done quickly and has to be sharp.”

Two of the most recent mergers of real estate companies based in the D.C. area have consisted of public hospitality REITs joining forces. These deals happen largely because one company is valued higher in the public market, and scooping up the assets of an undervalued REIT can help create efficiencies.

Bethesda-based Pebblebrook Hotel Trust completed its $5.2B merger with LaSalle Hotel Properties in December after making a series of increasingly large bids and beating out private equity giant Blackstone. Pebblebrook was able to offer the higher bid because it offered LaSalle investors up to 30% of the acquisition price in cash, with the remaining coming as Pebblebrook shares, which are valued higher than many hospitality REITs.

“Pebblebrook was consistently valued more positively in the public market than LaSalle, and that led to the marriage,” Green Street Advisors Director of REIT Research Cedrik Lachance said.

Tysons-based Park Hotels & Resorts agreed this month to acquire Chesapeake Lodging Trust in a $2.7B deal expected to close later this year. Park Hotels CEO Tom Baltimore has been a vocal proponent of consolidation in the hospitality REIT space, arguing it creates greater efficiencies in the market. In his Q4 earnings call in February, three months before announcing the acquisition, he told investors why he thinks the sector should consolidate.

“I think it’s inevitable,” Baltimore said in response to an analyst’s question about consolidation. “We are the most fragmented in a sector that is ripe for consolidation … At the end of the day, capital is going to go to the most efficient manager. It’s just not efficient to have 16 or 17 or whatever the number of lodging REITs that we have today. And over time it’s going to change, in my view.”

Chesapeake was a particularly likely candidate for acquisition because of the strategy of its founders, said Michael Bellisario, a senior research analyst for Robert W. Baird. The management team had sold its last two publicly traded companies, and had indicated the same intention for Chesapeake.

“They’ve been pretty open that the platform they’ve created is not necessarily one they want to be around through the course of multiple cycles,” Bellisario said. “It was an opportunistic vehicle created to buy properties on the cheap early in the cycle, capitalize on increasing values and ultimately realize that value.”

Public to Private: Capitalize On REITs Trading Below Asset Values

Private equity firms often seek to acquire REITs when their stock prices are down and take them private. The two largest owners of global real estate executed a handful of these types of transactions last year.

Brookfield bought Forest City Realty Trust and General Growth Properties in deals worth billions. Blackstone acquired Pure Industrial Real Estate Trust and Gramercy REIT. The surge of these major deals last year, and the slowdown in their occurrence this year, is entirely a function of REIT stock prices, experts say.

When REIT stock prices are down, they can trade at a substantial discount to their net asset value, which represents the combined value of their properties if they were sold individually on the private market.

Because of this disparity, private equity firms see opportunity to take REITs private, giving them the opportunity to acquire large portfolios of undervalued assets and sell them for higher prices.

“Private equity always wants to buy when it’s cheaper,” Bellisario said. “As stocks get more expensive, that makes it harder for take-private transactions. Everything is a function of the stock price and the public market value versus the private market alternatives.”

REIT prices fell significantly in the first five months of 2018, according to the NAREIT index, accounting for the surge of take-private acquisitions early last year. Georgetown University real estate professor Jonathan Morris said the REIT prices consistently drop when interest rates rise, making these types of acquisitions susceptible to the decisions of the Federal Reserve.

“There were several deals at the beginning of last year as rates were rising and the new Fed chairman said they’re going to increase rates,” Morris said.

The Fed raised the interest rate four times last year, but it has yet to institute a rate hike in 2019, which has led REIT prices to surge and take-private deals to disappear.

“REITs have been stronger than ever since the Fed signaled, ‘We’re not raising rates anymore,’” Morris said. “The stock price may be at NAV, so there’s no opportunity to buy the company by private equity groups, or it may be more than NAV, which provides an opportunity for a company to now go public.”

Private To Public: Grow A Portfolio Before Launching An IPO

When public market prices for REITs are at a high value, private real estate companies can seek to go public to provide liquidity for their investors. As private companies look to make their portfolios more appealing to the public market, they can often seek to merge with other companies, as was the case with one of D.C.’s most impactful M&A deals in recent years.

The JBG Cos. had long been seeking to go public, including a failed combination with New York REIT, before it executed the deal that ultimately led to its IPO. The company combined with Vornado’s D.C. business, closing the deal in July 2017 and hitting the stock market as JBG Smith.

“It’s not clear that JBG needed Vornado, but the marriage of the two made ample sense,” Green Street’s Lachance said. “There was a belief that the JBG management team was particularly strong and finding a way to partner with them would be positive.”

The portfolio Vornado brought to the deal included a host of Crystal City office buildings that had suffered high vacancy amid downsizing efforts from the federal government and its contractors. After JBG Smith took it over, that portfolio last year landed Amazon HQ2, one of the biggest economic developments wins in the region’s history.

Lachance said it makes sense for private companies to want to quickly scale their portfolios as they prepare to go public, as JBG did with the Vornado merger.

“It’s better to have a bigger portfolio than a smaller portfolio when you go public, as long as the portfolio is higher quality,” he said. “If you execute a strategy that makes you bigger and consistent with your strategy, that’s a big positive because that gives the market comfort you know what you’re doing and are going to grow that way.”